Having graduated from the University of the Arts in 2010, Caitlin McCormack has been remarkably productive. Averaging about 25 group and solo shows a year, it’s impressive that McCormack has the time and energy to keep producing her intricate crochet creations. The works on view in A Curious Nature at the PAA were all made within the past year, and they speak the ways that McCormack continues to develop the techniques and themes of her art. In contrast to the rich, glossy coats of Linda Cordell’s glazed porcelain animals, McCormack explores shades of gray, channeling her memories of people and places through the distorted and fantastical crocheted bodies of imaginary creatures. For McCormack, animals function as an intermediary between us and our memories; they take forms that our human bodies cannot, express thoughts and feelings that human voices cannot. While McCormack’s work is deeply personal, her creatures have the power to evoke not only her memories, but ours, as well. 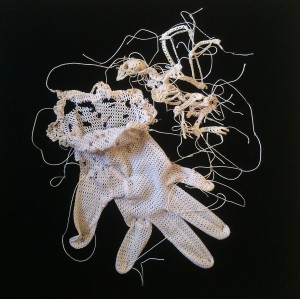 Turning to the right as you enter the gallery are a pair of works–“Bound, As It Were” and “Obligatus”–that incorporate antique crocheted gloves, hinting at the ghostly presence of a woman. Upon learning that McCormack learned to crochet from her late grandmother, I find it hard not to see these gloves as a more specific evocation of loss, and of the function of crochet as an art of memory that is deeply personal.

McCormack has been gradually increasing the scale of her work–no mean feat given the intricacy of crochet as a technique. At 36 inches in length (over twice the length of most of her pieces), 2014’s “Kindertide” is both delicate and visceral. The hollow, bird-like bones of McCormack’s other creations here take on a disturbing solidity. There are few stray strings or fragments of found crochet to distract us. We are confronted with the skeleton of a large creature that seems both amphibian and mammalian, crushed beneath the glass. The density of string makes this work appear weighty, a creature of the physical world and not just of memory or imagination. McCormack explained that she counts each thread carefully, and that each repetitive working of the thread is an act of memory, a sort of secular rosary of crochet. The weight of the particular memory represented by “Kindertide” must be heavy indeed. 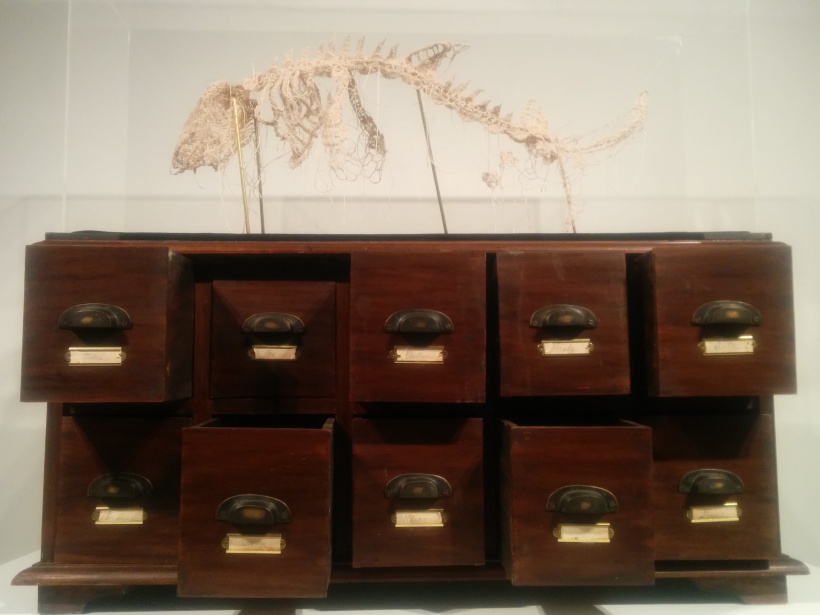 Occupying a niche in the center of the gallery is another large-scale piece, “Mansion of Prodigies.” Consisting of a crocheted skeletal shark atop a chest of drawers, we are invited to interact with the piece, opening and closing its small drawers to peek at the tiny creatures inside. “Mansion of Prodigies” functions like a latter-day version of the cabinets of curiosities of Renaissance Europe, which were encyclopedic collections of scientific, artistic, and historical objects ranging from gemstones and fossils, to art and antiquities. McCormack’s creatures look like unclassified specimens from an unknown land. Pinned down as if to dissect and classify them, the creatures are contained in drawers labelled with cryptic words–“Electra,” “Aurora,” “Titus”–that only hint at the nature of their mysterious contents.

For all their intricacy, there’s something cinematic about McCormack’s work, each piece hinting at a larger narrative. The black boxes lined with black velvet look like miniature stage sets, the intricate strands of thread orchestrating the crocheted sculptures like puppets guided by the invisible hands of memory. This is particularly apparent in one of McCormack’s most recent works, which she created for this show–“Loessborne.” A play on words and ideas surrounding sorrow and loss, birth and bearing, we see two tiny figures, one hunched over the other one in an ambiguous pose that could suggest either love or violence. These two figures are framed underneath by a crocheted lace collar, and from above by a web of threads that extend in rigidly straight lines from a single pin. The linear geometry of the string seems to impose an unnatural restraint on the organic, curving forms of the crocheted figures, hinting at a tension not only between the two figures, but between these creatures and their environment or circumstances. While McCormack’s inspiration may come from personal memories, the intricacy of the technique and the ambiguity of the imagery draw us in, creating eerie stage sets for us to populate with our own memories, dreams, and desires.

Caitlin McCormack’s work will be on display along with the other creatures of A Curious Nature through December 4, 2016. To read more about her work, check out her website.

Promote Your Page Too